This site is kept open for archival purposes. There are lots of blog posts on everything from tech stuff to Scientology on this site. It will remain open for years to come.

But, my new home is at isene.org. That is where I continue blogging and sharing materials for your free use. You can subscribe at the bottom page over at isene.org to keep yourself updated on new posts.

Articles, books, my artwork and music is shared at one of the pages on my new website, and easily reached via isene.com. 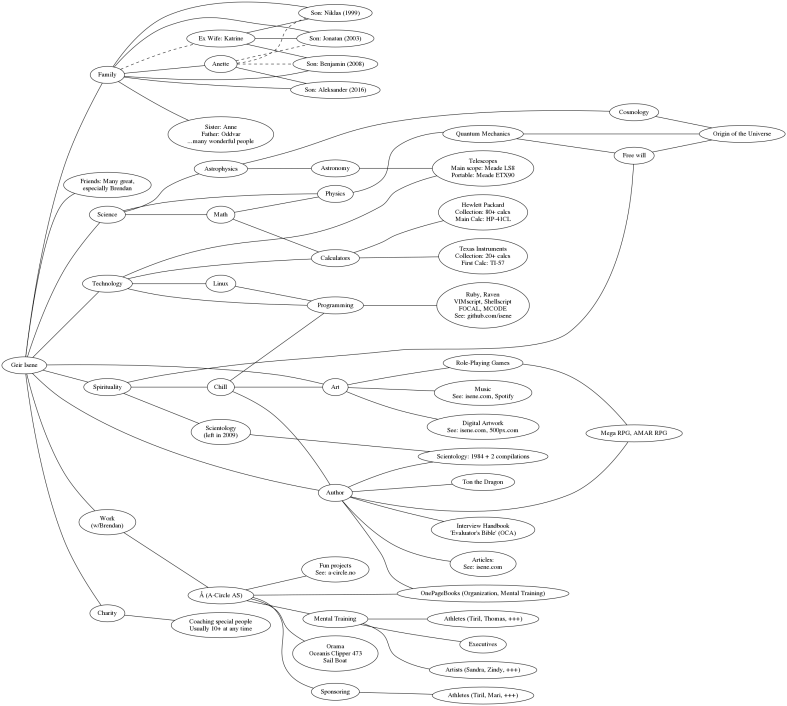 Not even close to complete or even correct, but it’s a start.

Here’s a HyperList of my current computer setup – for reference in case someone is looking for inspiration:

Here’s Sandra impacting the crowd at Rådhusplassen with the huge “VG-lista” show:

It’s been a cool trip from the first time we met. She has evolved into a very complete artist with great crowd impact. The clue is always to stay mentally present and to keep more interested in moving the audience than interesting in front of them.

Not because I have any ambition to earn a dollar on this, but just because I can.

Having published Nittenåttifire, it was about time I also published some music. Enjoy ❤

In 1987, we made radio history in Norway with the show “Midnight Magic“. It was the first role-playing program on the air and the only program that had a thriving black marked for recordings where certain programs were sold for as much as NOK 400 (USD 100 today). Stein Halvorsen and I had great fun running the program for 3 years.

The format was simple and effective: Each program had a certain theme and a specific goal to reach within a 10-minute play. An introduction was played at the start of the program to give the listeners the background to the evening show. This could range from rescuing a fair maiden from the clutches of an evil dragon to disarming a nuclear warhead before the city was blown to dust. Four players were picked out of the 100 or so calling in to participate. Each player got to pick a few items to help them on the quest. And then the adventure begun.

One of us (me or Stein) was the Game Master telling the participant what he or she saw while the other played each encounter along the way. They could meet the troll under the bridge, the goblin in the woods, the pireate on the ship, the alien in the hangar, etc. Spontaneous acting on the air.

Having released the complete Amar RPG, I thought my next project would be releasing all the recovered Midnight Magic recordings. But alas, SAJ has kept the Midnight Magic site going and I could sit back and relax, write this blog post and simply point to the great Midnight Magic archive.

The cover of the original Mega Role-Playing System (Fantasy Edition) released in the UK by Bent Brakas an me the same year as Midnight Magic started airing.

Some have wondered what I have been up to the past few weeks. The answer is seen over at d6gaming.org.

It has been a massive undertaking to get the whole of the Amar RPG online – rule system, information on the Kingdom of Amar, world mythology and more.

The whole system is now Open Source and put on a wiki so that anyone can pitch in to improve or add to the system or the world.

We welcome anyone to contribute new skills, spells, potions, rituals, magical items or any other neat and worthwhile additions.

And we welcome every nitpicking language enthusiast to correct errors in the text.

There is also a good collection of graphics included that any Game Master of any RPG system can freely use.

Two weeks ago I held a talk on Scientology in the southernmost city in Norway, Kristiansand. JessicaX, an original Anonymous Norway, took pictures and videos. Then I was told about Magisto – a creative video app. Downloaded… and a few days later… voilá:

The talk was in Norwegian, so I’ll leave you with this fancy trailer.

For some odd reason, I accidentally stumbled across a comment here on my blog from more than 2 years ago. Beyond the point regarding Scientology, Charles Bourke Wildbank made an excellent point about the retrospective nature of using statistics in business. While history and statistics do have their valuable uses, they can also stifle creativity. Interesting accidental dig, methinks 🙂

When I did art for Scientology many years ago, there was an enormous amount of micromanaging and stifling of creativity. I just said, “I’ve had it!” The problem with statistic hounding is that they are based upon YESTERDAY and OLD STUFF DONE, yet they wish to REPEAT those actions. That is NOT CREATIVITY. Every artist on staff I have known no longer work for Scientology today. Small wonder. We want pioneers and all artists are of the pioneering sort. There are others who pretend to be artists and paint “tradition”. That is their choice. It allows them to brush up more skill until they are ready to make that LEAP.

Touching your heart, your soul, your life
His inquiring eyes exploring yours
Taking hold of your breath, your self
The gentle feeling of a teardrop, but of course

He is new to this world, to yours
Which will never be the same again
Your futures will forever run a different course
When you end yours and his goes on – this will be then

Sad in a way as the moment evaporates
But most precious as you fully grasp
The richness of emotions, value, of what it creates
The change, the love, flowing past