With reference to my previous blog post, I have come to the conclusion that one of the most dangerous pitfalls is that of accepting data without you inspecting and verifying it for yourself. 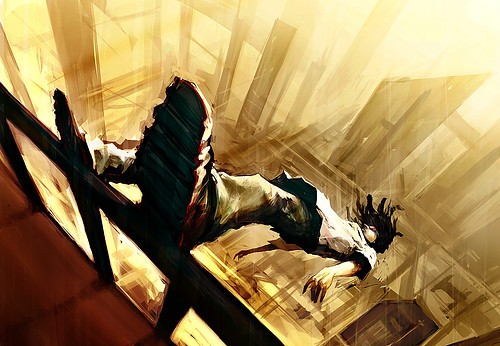 In everyday life this poses only a small risk – like when you accept some gossip about a friend without verification. Or when you believe a sales pitch from a used cars salesman. Or when you accept a lie from your loved one. Most of the time the data presented is true, so only occasionally you are led to believe a lie. But even if it is true, you run the risk of adopting a fixed idea for yourself. Anything believed without personal inspection tend to solidify – because you yourself cannot back it up or really defend it.

Of course it is impossible to inspect or verify every bit of information that you encounter every day. So the hazards of the daily data stream is maneuvered by continuous and often unconscious risk management. Some are good at it and get a hunch when they are confronted by a lie. Others never smells the rat and accepts statements nilly-willy; The hyper-critical tend to swallow any criticism without inspection, while the gullible will swallow any nice and fluffy statement without a blink. Although the former will probably give you a more miserable life than the latter, there are better ways to deal with information.

The real danger comes when the data is big and life-sweeping – like with life principles, general information about people and society or all the way down to axioms of existence. With foundational data, the occasional hunch or gut feeling just doesn’t cut it – because that would amount to bad risk management. When putting a man on the moon, an engineers hunch that the rocket will fly simply won’t fly. For sweeping data, actual inspection and verification is essential – or you can end up not only with a life lie, but with a solid, fixed idea that you cannot back up.

What happens when people accepts sweeping data without personal inspection? They accumulate fixed ideas. The data is “above their head”. The data becomes bigger than themselves. It enters the realm of belief. And such show up in debates as knuckleheadedness, broken records, illogic or plain stupidity.

A person prone to accepting big life data without personal inspection will end up with less personal integrity, more belief, less facts, a more defensive attitude and less free in his or her thinking. And this is the case even if the data happens to be true. The person will become smaller – to the point where there is no one left to inspect anything – an information robot. Nobody home.

A symptom of someone going down this road is a closed, defensive mind not open to opposing views. Or outright attack of contrary opinions.

In my own experience this covers way to many scientologists and Scientology critics. Whether they accept Scientology data or anti-Scientology data without personal inspection – it still closes the mind and makes the person smaller.

This is by no means confined to Scientology, religion or science. This is relevant in any areas of life dealing in general or sweeping data about life and livingness. Such as politics.

The higher on the Scale of Cult Think, the more a group will coerce or enforce belief and discourage or suppress personal inspection of information.

It is a paradox of betrayal that the Church of Scientology demands agreement to the principles laid out by L. Ron Hubbard. It’s even ingrained in his own writings. Even though he very correctly pointed out that you should not accept any data without you yourself being able to see it as true, in other places he enforces compliance. Like the practice of Method 4 Word Clearing where a disagreement with the materials studied is not accepted as anything less than a misunderstood by the student. Or in the policy Keeping Scientology Working #1, where no disagreement with the technology or even the slightest improvement to it is accepted. And there are many other examples. The Church of Scientology follows these policies and viewpoints to the dot, enforcing intellectual compliance, hammering out of existence any opposing views.

And this is a paradox of betrayal because the very purpose of Scientology should be to make an individual more free, more himself and better at evaluating situations, life and information. Quite the opposite is in fact happening. The evidence for this are in the thousands of debates about Scientology on the Net. It becomes stigmatized and a study in illogical debate.

Information exchange breaks down in the face of fixed ideas. It becomes an exercise in defensive tactics and strategies. Intelligence is futile.

Another evidence of what happens in Scientology when people accept data without personal inspection is a far more serious one – an elephant in the room – the absence of amazing people.

Or, taking this even further; It’s not just that Scientology seems to fail in producing amazing people. It seems to produce people with lots of issues. In my experience, I have seen more people with a wide range of issues who have been in Scientology than those who have never been in. I have plenty of non-Scientology friends that lead a really good life, some even enlightened lives, while many scientologist friends have issues with themselves, their families, their personal economic situations. Many have problems even contemplating any views opposing their own fixed ideas about life – implanted by accepting Scientology data without proper verification. It boils down to…

Merits. The efficacy of any principle, datum, procedure, technology or body of knowledge must be judged by its merits. Does it deliver actual, provable value? Are the results up to snuff?

Scientology is a sorry scene when it comes to actual proven results. Hence another area is brought into play – Hubbard’s policies on Public Relations. Most any area can be polished up to shine, even in the absence of verifiable results. Today, Scientology does not deliver on its promises.

It is a wonder that so many scientologists are unable to apply Hubbard’s own data about looking at the statistical results when gauging the efficiency of any technology.

Much of the lack of results can obviously be attributed to the current dictator of the Church of Scientology. But to reduce L. Ron Hubbard to a man without any real influence on the current scene in Scientology is to do him grave disservice.

Before the audience think I have turned my back to Scientology and become “a critic”, I will add that it is not a matter of being “for” or “against” but rather to honestly evaluate the effects I can see. It comes down to the practice of looking. Continual Honest Looking.

I have written many times that I have personally had great gains in Scientology, and I believe there to be excellent gains in Scientology for most people. But to accept data at face value is a road to personal unintegrity. You must be able to verify and sift out what works for you in this vast ocean of Scientology data. You must be able to think with it, to back it up, to be fluid in your evaluations and open to opposing views. And this goes for any field dealing in data about life, the universe and everything. Practicing this, and there would be very little danger of losing yourself.

I believe the continual practice of honest looking to be the real way to enlightenment.

PS: I realize that this blog post may rattle some stable data or even piss off a couple of camps. If so, I consider that to be a step forward.

238 thoughts on “The danger of losing yourself”