I have been thinking about my changing viewpoints on Scientology. How I started out back in 1984 when I first encountered the subject, how I became a Scientologist, when I discovered the church management was corrupt, and how it went south from there. Being a fan of simple models, it dawned on me that this can be easily represented in a simple matrix.

Although the model is simplistic and harbors several issues, it seems to serve well to explain my own path from a wog to a scientologist to an independent scientologist and to being me (with some viewpoints on it all).

I thought of a simple matrix where the X-axis represents a person’s sentiments on the subject of Scientology, while the Y-axis represents his sentiments toward the Church of Scientology and it’s management. I boxed it all in so that we get a 100% positiveness regarding Scientology to the right and 100% positiveness toward the church management at the top. Conversely, we get a 100% negative viewpoint on the subject to the left and 100% negative viewpoint on the church at the bottom. We end up with four quadrants that I have labeled:

In the middle, we find people that do not identify themselves with the quadrant where they reside, and remain fairly neutral in their views – somewhat positive or negative along either axis.

A Scientologist would be someone who are in the Church of Scientology, supporting it to a lesser or greater degree. An independent Scientologist thinks Scientology is great, but objects to the church and how it is run. A critic dislikes both the subject and the church, while a hired gun would consist of lawyers, PR personnel and the like who don’t have much good to say on the subject but likes how the church management give them money for the job they do.

At the edges of the matrix we find fanatics.

People move inside the matrix. They can move fast or slow, often or seldom, erratic or smooth. But as the person discovers new information on Scientology, he moves one way or the other.

A fairly typical path could be something like this: 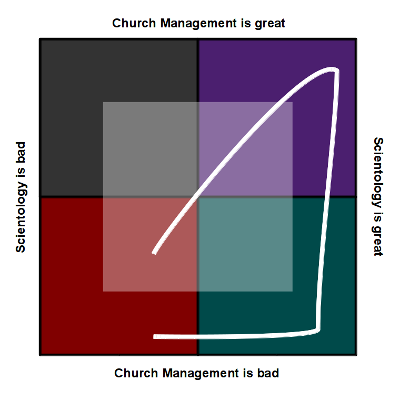 Here the person starts off as somewhat critical to Scientology – both the subject and the church. He gets in contact with the church, gets convinced that there is something positive about it, experiences some personal gains and end up as a Scientologist. He then experiences some mismanagement, questions how the church is run, discovers that the church management is corrupt and ends up rejecting the church. At this time he becomes an Independent Scientologist. He is all of a sudden free to question everything Scientology. He start thinking for himself. This gets him gradually over to protesting elements in the subject itself until he protests quite a lot of it, ending up as mildly critical to the whole lot.

But people travel their own path in this diagram – and they end up at different places. It all depends on what information they acquire and how unafraid they are to question their beliefs, how willing they are to experience Scientology first hand and many other factors.

My path in the matrix is something like this: 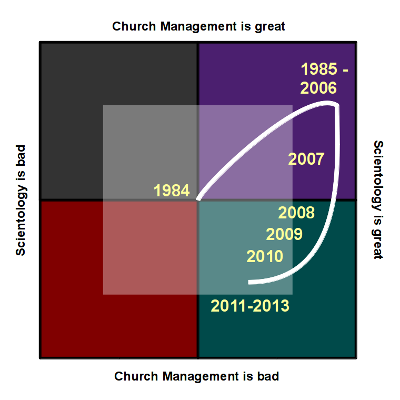 I already see improvements that can be made to the model, but I have decided to present it like this for simplicity.

It would be interesting to hear your own journey in this Scientology Matrix. If you want to draw your own path, you can use this template: 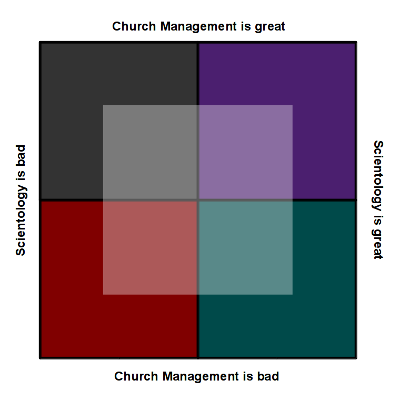 If you’d rather just spell it out in words, we can use numbers to represent the axises. Each axis goes from -5 (left or bottom) to +5 (right and top). The numbers are (X,Y) – or (Scientology,Church). In this way you can indicate where you are at a given year or period of years, like my journey represented in numbers (rounded to integers):