Before reading this blog post, please read up on my previous post on the Scientology subject of Clear – “Conclusion: There are no Clears”

Be warned that this blog post contains advanced Scientology stuff. 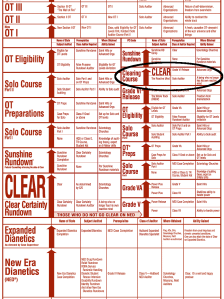 I have recently done some further research into the State of Clear and its history. Let’s first recap some basics and then bridge over into a curious but fundamental inconsistency of Scientology:

I put this question forth to one of the wisest and highest trained Scientologists in history. And he could not sort out this interesting, perhaps disturbing inconsistency.

At the same time I have talked to many who have done the Clearing Course, and most have had great, even life-changing gains from doing that step on the Bridge. So clearly it does Something profound.

I believe Allan Watts got it right when he said:

Make the person do some sort of regimen that the person truly believe he will get great gains from and voilá.

209 thoughts on “The Unclear path to Clear”